We've all had pancakes and bacon, but how about adding the bacon right to the pancakes? Yep, we did it. Forget blueberries, these Bacon Pancakes topped with butter and maple syrup are the stuff of breakfast dreams.

Guys, we're going on an adventure. It's been so long since we went somewhere that wasn't walking distance from our house, apart from a couple trips to Ikea when we were renovating our kitchen. But I shall shortly be getting on a train and making a little trip to the next county over for a day walk to see some birds, some ruins, and a waterfall. I'm gonna walk until my feet fall off, take a bazillion photos, and eat as many peanut M&Ms as humanly possible.

By the time this post actually goes live, I will once again be stuck in my own city since Glasgow has remained at a higher restriction level then the rest of the country. We're trapped here, hopefully only for a week, but who knows. Gotta get that adventuring in while we can.

Having adventures and stomping through the countryside makes me so hungry. Gotta get a good breakfast in. I'd highly recommend a big stack these Bacon Pancakes with plenty of butter and syrup. We've turned up the awesomeness factor in our favorite buttermilk pancakes, but you could make these with a pancake mix as well. Or make your own pancake mix. Whatever you got. Every bite has a bit of crunchy bacon baked right in for the perfect marriage of salty and sweet. I can't get enough.

How to make Bacon Pancakes

Obviously, you need to start with bacon. I use scissors to cut strips of streaky bacon right into a hot skillet. Cook and stir your bacon pieces until crisp, then remove them to a paper towel-lined plate to drain off the grease. If you have a pool of bacon grease, pour it out into that never-ending jar of bacon grease in your fridge that you just keep topping up. Don't clean out the pan, though. Leave a thin layer to cook your pancakes in later.

Once you have your favorite pancake batter mixed up, all you need to do is ladle the batter into your hot skillet as usual. While the first side is cooking, sprinkle some bacon pieces over the top of each pancake into the uncooked side. Then when you flip the pancakes over the cook on to other side, the bacon will be baked right in. It's almost too easy.

What kind of bacon should I use?

American friends will almost certainly know the answer to this because it's the default bacon in my country, but if you're in the UK or other places where back bacon is the standard, make sure you take note. You want streaky bacon for this recipe. In my opinion, the crispiness of the bacon really makes it. Back bacon would just stay chewy, which probably wouldn't be as good. Unless that's your thing. I'm not gonna stop you.

What style of pancakes should I make?

Again, my British friends might be scratching their heads. I didn't realize there were so many different kinds of pancakes. You want to do fluffy American-style pancakes for this. Read more about the perfect American pancake in my Buttermilk Pancakes post.

Maple is a popular wood for wands and it's also associated with love, money, and longevity. I saw the maple sap, and hence the syrup made from it, referred to as the blood of the maple tree. Maple trees are also believed to repel evil spirits, so the branches are used for home protection. Use the syrup to draw sigils right onto your pancakes before you start eating, or add it to a spell to sweeten the deal. (Source: Flying the Hedge and WytchWood)

We don't mess around here folks. When we say awesome, we mean it. These Bacon Pancakes definitely meet the mark. You're gonna love 'em. 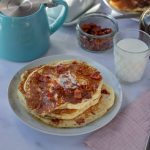 If you make this recipe, why not leave a comment and a rating to let others know what you thought? I hope you love it! Thanks so much.