Black Pudding Hash is completely awesome. If you've never tried black pudding, don't be afraid. It's deeply savoury and adds so much flavor to this crispy potato action. And don't forget to put an egg on it.

When I occasionally need to put the heat on in my house in the middle of July, I sometimes question why we moved to Scotland. How have people survived for so long in a place that's cold and dreary for so much of the year? And yet, Scottish people are some of the liveliest, most caring, genuine people I've ever met.

Maybe that harshness has forced them to rely on each other a little bit more. Maybe they've learned to make the most of every moment of sunshine and every resource the earth provided. I can tell you that the moment you step outside the city, it's obvious that this is one of the most beautiful places on Earth.

Though American comfort food will always be at the core of my foodie soul, I'm learning to love the way they do things here in the UK. I'm even open to eating a big of haggis. I don't love it. I don't crave it. But as part of another dish, it's not bad.

Possibly equally baffling to Americans is black pudding. What the hell is it? It's a blood sausage made with pork blood, pork fat, beef suet, and oats or some other grain (according to wikipedia). It's got an intensely savoury flavor and a somewhat crumbly texture from the oats. Black pudding is very much in the spirit of reducing food waste, and it can be really tasty.

How to make Black Pudding Hash

When I spotted the recipe in Nigella Lawson's At My Table, I obviously had to give it a try. I totally meant to add cheese this time, but just forgot. I think a bit of a creamy element would add something really lovely. You should totally do that when you make this.

This is also an ideal way to use up any potatoes that might be languishing in your kitchen. Cube them up, fry them in a hot pan some olive oil without touching them to get a good crunchy brown on one side, then let them soften up by adding a little water to create some steam. Just like with any hash, we just keep layering in flavor. In this case, it's jalapenos or other chillies, green onions, and of course the black pudding. Oh, and don't forget that gorgeous runny egg. Full instructions are in the recipe card below.

We really shouldn't be traveling right now, but see if you can go on a little vacation in your kitchen by sourcing some good quality black pudding and hashing it out. I think you'll love it. 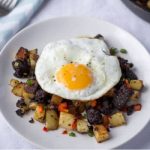