Buffalo Chicken Pinwheels are a tasty little party snack for everything from game day to a birthday party. The muggles will never know you've created something in a sacred spiral. They'll just know it tastes delicious.

As far as I can tell, people don't really have friends over to watch sports here. Football, aka soccer, doesn't really have play-offs. There's a bunch of complicated sub-leagues, but they don't seem to count for much. It's all a bit anti-climactic. And from what I've seen, no other sport comes anywhere close to rivaling football's level of popularity.

And because every single town has at least one professional football team of some level, anyone who's interested can just go to a game. And if they don't have tickets, they're more likely to watch it in a pub than to have people over to their house. I feel like they're really missing out on an amazing opportunity to eat spicy food with a lot of cheese.

No matter what occasion you make these for, though, whether it's the Super Bowl, the World Cup finals, or a Little League championship (or some totally non-sports related moment) they're gonna be awesome. We've got spicy chicken, jalapenos, green onions, and lots of cheese wrapped up in a flaky pastry spiral. It's a beautiful swirl of textures and colors.

I like to serve these with some blue cheese dressing as a dipping sauce. They're not too spicy, just hot enough to make it interesting. If you really wanted to blow people away, you could add a dash or two of a more potent hot sauce to the filling. You could also use pepper jack or chedar with chillies to make it even spicier. You've always got options.

Whether you're interested in sports or not, you've got to admit there's a bit of magic that happens when people combine their energy for a common cause. Sport is the easiest way to see this. The energy coming from the fans does seem to make a difference to the team's performance. Can the food we eat while cheering on the team affect the kind of energy we have as fans?

I'm gonna go with one of my favorite answers here. Can't hurt, might help. Spicy foods like hot sauce are going to give you a burst of active, fiery energy. Cayenne is known as a great obstacle remover, so it can be called on to clear any obstacles to your team's path to victory. Cheese also induces happiness. If you're enjoying yourself while you're watching your team, your going to lend them better energy. See, it totally works as a victory spell.

How to make Buffalo Chicken Pinwheels

We're starting with a base of crescent roll dough or puff pastry. In a bowl, mix together chopped or shredded cooked chicken, buffalo sauce, chopped jalapeno, green onion, cheese, and some spices. Once that's all combined, just spread this over your dough, then roll it up like a cinnamon roll.

Slice this into spirals and place them on a silicone baking mat or parchment paper and bake in a hot oven until the pastry is puffed and golden. It's as simple as that. These are great hot but also taste good at room temperature. Serve with some blue cheese dressing.

Can you make your team win by cooking the right food? That sounds like magic to me. I think these Buffalo Chicken Pinwheels are just the spell you've been looking for. 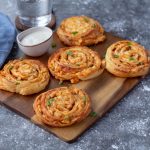 Buffalo Chicken Pinwheels are a tasty little party snack for everything from game day to a birthday party. The muggles will never know you've created something in a sacred spiral. They'll just know it tastes delicious.