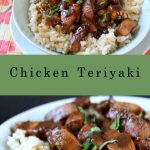 Homemade Chicken Teriyaki is an awesome weeknight dinner. You get to make your own marinade/sauce so you get to control the flavor. Serve with rice for a simple meal.

When I was probably around 13 of 14 years old, my mom was on a diet. What this meant for me was that my mom spent a lot of time at the gym, and we ate baked chicken breasts marinated in Yoshida teriyaki sauce with white rice every night. Okay, it probably wasn't every night, especially considering how often I actually ate at home back then, but in my distant memory, it seems like that's all there was for a while. As an adult, the last thing I wanted to make was chicken teriyaki. I had already had quite enough of that, thank you very much.

When I was living in Taiwan, Nigella Kitchen was my only cookbook, and I tried just about every recipe in that book I was capable of making with the ingredients I had available to me. The chicken teriyaki recipe was something I knew I could pull off. If I could find chicken breasts without the head and feet attached.

What makes Chicken Teriyaki so awesome?

This recipe is full of flavors. Sweet, sour, savoury, and probably even some of that umami action. That's like magic, right? Sure, you can just go buy a bottle of teriyaki sauce at the store, but where's the fun in that? This recipe may be a tad bit expensive the first time around if you have to buy new bottles of some of the ingredients, but once you have them, they'll last awhile.

The chicken gets glazed in the thick, dark brown sauce which is anything but boring. I also made mine with brown rice this time because I think it has more flavor and texture than plain white rice. Also, I hear it's supposed to be better for you. I don't feel qualified to say whether or not this meal is healthy, and you could probably up the virtue factor by adding in some stir-fried vegetables, but I didn't feel the least bit guilty about eating this. In fact, I found the whole thing rather pleasant.

I think my mom would have liked this dish. If it helps me lose as much weight as she did back then, I might almost be willing to eat it every day.

Chicken teriyaki is full of flavor, simple to make, and low on guilt.