This Cornish Pasties recipe is simple and delicious with easy to find ingredients. Invoke the earthy energy of the coal miners who originated this dish for a comforting dinner.

Learning about witchcraft has definitely increased my interest in traditional British foods. Modern witches owe much to The Hermetic Order of the Golden Dawn founded here in Great Britain in the late 19th century. Imperfect as it was, it was possibly the biggest influence on the resurgence of modern occultism and the development of Wicca.

And though they borrowed (or maybe stole) from cultures and traditions from around the world, there's no denying the strong influence of pagan folklore from Britain and Ireland. To me, British food feels inherently witchy. When you walk in the woods here, you sense the magic, and the foods that people created here are imbued with that magic as well.

What makes this Cornish Pasties Recipe so awesome?

Cornish Pasties are simpy meat and potatoes wrapped in pastry and baked until piping hot. While this recipe might not be the most traditional, it's perfect for the busy, modern witch. We're using easy to find ingredients here like ground beef, potatoes, onion, and carrot. We're taking help from the food processor for both the dough and the filling. Our ancestors had to work so hard, they'd think we were crazy for not taking advantage of modern appliances.

This is a hearty dish made for hungry coal miners. I can eat about a half a pasty. I like mine with plenty of gravy (instant is fine). Since this dish was meant to be a meal all on its own, you don't really need to serve it with anything. It's also meant to be portable, so you could eat them cold as well. They're perfect for a picnic in the woods.

Cornish pasties were historically eaten by coal miners in Cornwall. It was a way to make their lunch portable when they were deep in the earth. Pasties are traditionally associated with mine-dwelling spirits called "knockers" who created knocking sounds within the mines which either indicated a rich vein of ore or an impending tunnel collapse. It's not clear whether some people believed one or the other or if you just heard the knocking and it was 50/50 whether you were going to get rich or die a greusome death. To get on the knockers' good side, miners would leave an offering in the form of a small part of their pasty to eat.

Sailors and some fisherman would discard a bit of the pastry to appease the spirits of dead mariners. Other fishermen believed it was unlucky to bring a pasty on the ship. (Source: Wikipedia)

Pasties are also a great way to use sigils in your kitchen witchcraft. Carve the same sigil into the top of each pasty to evoke a specific intention or use a different symbol for each family member's pasty.

To me, Cornish Pasties evoke a grounding, earthy energy. For specific details on each ingredient, check the Kitchen Magick page.

How to make this Cornish Pasties Recipe

Our cauldron today is taking the form of a food processor because electricity is a form of magic I'm sure our ancestors would have been grateful for. Make your pastry by adding flour, baking powder, salt, butter, and egg yolks to your food processor and pulsing to combine. Then add the water with the machine running until the dough comes together. Wrap up your dough and chill it in the fridge for at least an hour. You can do this part well ahead of time if that's easier.

Then all that's left is to fill, crimp, and carve. Divide your dough into four roughly equal pieces. Then roll each piece out on a floured surface to about a nine-inch circle. Divide your filling amongst each pasty. Pile it up on one half of the circle so you can fold the other half over the top. Make your crimping as fancy or rustic as you like, just be sure to get a good seal. Then you can either add a few simple steam slits, or carve a sigil, intials, a pentagram, or any other symbol you wish into your pasties. Finally, bake them for about 50 minutes until golden brown.

Don't forget to leave a bit for the spirits.

What's traditionally in a Cornish Pasty?

An authentic Cornish pasty, which actually has protected status, is filled with diced or minced beef, usually skirt steak, along with onion, potato, and swede, plus a "peppery seasoning." Apparently, the use of carrot was frowned upon.

We move with the times and honor the past all at once when we enter the kitchen. Make this Cornish Pasties recipe your own, but don't forget to honor those who came before. It'll be awesome. 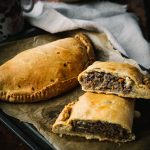 This Cornish Pasties recipe is simple and delicious with easy to find ingredients. Invoke the earthy energy of the coal miners who originated this dish for a comforting dinner.

If you make this recipe, please leave a rating and a comment to let us know how you got on!