Homemade Cinnamon Rolls might be the best food ever created. You'll experience absolute fits of ecstasy while eating these. With their soft, sweet, gooey centers, these spirals of cinnamon and clove will send you to new heights of joy.

The day this post comes out will be my 43rd birthday. Sinking farther and farther into my 40s as everyone around me seems to stay so young has been both a challenge and a blessing. I don't know when or why I became the wise and responsible one. Sometimes I think it's absolutely ludicrous that anyone would heed my advice.

On the other hand, the older I get, the less interested I am in engaging in drama and conflict. I just don't have the time and energy for it anymore. I'm too busy manifesting my desires to worry about office gossip or dating woes. Only come sit next to me if you want to talk about how to become wildly happy. All that other petty nonsense is boring.

I'm also less willing to settle for mediocre. I only want the good stuff. And guys, these homemade cinnamon rolls are the absolute best. They've got just a little bit of caramelized crunch on the top while staying soft and gooey underneath. They're topped with a bit of buttermilk glaze that adds a slight hit of acid to brighten up the dark and warming spices. I could eat one every day. I probably shouldn't, but I definitely want to.

Also, if you're the type of monster who just cuts into a cinnamon roll willy nilly with no regard for it's perfect spiral shape, we maybe can't be friends. You've gotta pull these apart with your fork, working from the outside of the spiral into the perfectly gooey center for the most perfect bite at the end. You could say it's like a ritual, and the reward is absolutely worth it.

The magick of the spiral

We've discussed the magical properties of cinnamon, clove, brown, sugar, wheat, and all the other ingredients in this recipe, so instead, I thought we'd look at sacred geometry in kitchen witchcraft. In this case, we'll dive into the symbolism of the spiral.

The Hermetic Principle of Correspondence states "as above, so below." The spiral is perhaps a perfect example of this. From the spiral of the galaxy to the smallest snail shell, spirals can be found all over nature and are much more common than straight lines. This shape is found in some of the earliest artwork of ancient cultures as well. Archeologists and anthropologists are making their best guess as to the meaning, but this shape is thought to symbolize the neverending cycles of nature, life, and death.

Spirals are also closely associated with the divine feminine and mother goddesses. In addition to symbolizing the life cycle, this shape is also thought to indicate intuition. This shape can also be seen in ancient serpentine dances taking the winding and spiral form of a snake which symbolizes regeneration. A spiral is also sometimes used as a symbol for the fifth element, often believed to be spirit. (Source: Learn Religions)

For information on the magical properties of the ingredients of this recipe, check the Kitchen Magick page.

How to make Homemade Cinnamon Rolls

Making homemade cinnamon rolls is pretty easy if you have a stand mixer, but it does take some time. First we have to make an enriched dough, and while you can do it by hand, the dough is very sticky, so I'd definitely recommend taking some help from a machine. We're making a yeasted dough with a bit of sugar, milk, vanilla, and egg. Then we're working in a bunch of butter and adding only enough flour to make the dough pull away from the edge of the bowl as it kneads.

Once your dough is mixed and risen, you'll turn it out onto a well-floured counter and roll it into a big rectangle. Onto that rectangle, we'll spread a bunch of melted butter, then sprinkle over a mixture of sugar, brown sugar, cinnamon, clove, and maple syrup. Roll it up as tight as you can and cut it into 8 giant rolls.

After the second rise, we'll let these bake until they're brown on top. They may look a bit dark, but that's because of the sugar. Don't panic. They're still awesome. As soon as they come out of the oven, douse them in even more melted butter. Then once they've cooled a bit but are still warm, you can drizzle on a glaze of powdered sugar and buttermilk.

Can I make these ahead of time?

If you want to make the dough and roll and shape your cinnamon rolls the night before to have them freshly baked for breakfast, you can cover these and put them in the fridge overnight. You'll just want to set them out on the counter and let them come to room temperature before baking.

Can I add other stuff to my cinnamon rolls?

If you're one of those weirdos who likes nuts and dried fruit in your cinnamon rolls (okay, I'm probably the weirdo here), you can certainly add them to your filling before you roll things up. Pecans and raisins are pretty standard.

Everyday that I eat a homemade cinnamon roll is a good day. I mean, it's not the only thing that can make a day good, but it never fails to make a day better. I hope you give these a try. It'll be awesome. 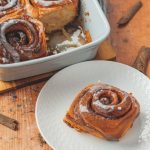 Homemade Cinnamon Rolls might be the best food ever created. You'll experience absolute fits of ecstasy while eating these. With their soft, sweet, gooey centers, these spirals of cinnamon and clove will send you to new heights of joy.

Recipe adapted from The Joy the Baker Cookbook by Joy Wilson.

Processing…
Success! You're on the list.
Whoops! There was an error and we couldn't process your subscription. Please reload the page and try again.
« Celebrating Yule
Peas with Pancetta & Cream »