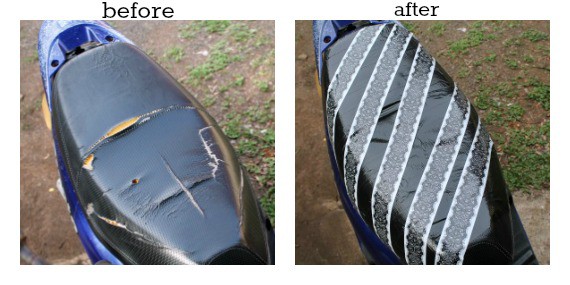 Use decorative duct tape to fix your torn moped seat for under $10. It’s a simple fix that absolutely works and lasts for ages. So you followed my advice and bought a moped. You’ve been zipping around town feeling awesome because you’re only spending $5 a week on gas while your insane car driving friends are spending ten times that. You’re wearing your helmet because it’s better to look like a dork than have your brains splattered on the pavement. After all, your brain is your most attractive asset. You’re feeling pretty rad.

But then you get a  tear in your seat. It rains all winter and the water soaks into the cushion and you keep showing up to work with a wet butt. It costs at least fifty bucks to get it replaced, and that sucks. What’s a cheap girl to do?

Duct tape! Duh. You can fix something broken, and personalize it for less than ten bucks. It’s just bursting with win.

I went to my local office supply warehouse (Fisher Hawaii in Kakaako) where they have about twenty different colors and patterns of duct tape. I bought one roll of black and one roll of a black lace pattern. Get whatever you think is awesome. First, I covered the whole entire seat with the black duct tape. Just start on one end and pull the roll across. Use scissors to get a nice clean edge and tuck the ends up under the seat a bit to make sure you have full coverage. If you just have one tear, you may not want to do the whole thing. I thought it looked more uniform to cover the whole seat. I had a lot of damage.

I then added the lace tape in diagonal stripes just for fun. I think it looks pretty fun. You might also try a chevron pattern if you’re good at geometry.

I’ve had the tape in place for a few weeks now, and it hasn’t started peeling off at all. I also noticed that it’s actually easier to dry off the seat now. The water just beads on the tape, and you can wipe it right off. It’s pretty genius. I also had plenty of tape left over for other duct tape type emergencies. Why spend money on new stuff when you can fix what you have with something cheap and make it even better? And now you’ll have money left over for cheese and chocolate. That’s what it’s all about.

Make this Potato & Spinach Curry for someone you l

It's Sunday, and you deserve cake. Something simpl

I used to really struggle with making biscuits, bu

I've got your new summer potluck super star. Every