This Lychee Martini recipe is going to be a hit at your next party. A potent mix of rum, vodka, and lychee juice can be shaken one drink at a time or mixed ahead for a merry crowd.

Though I mostly spend my time in my own house these days, my Sagittarian heart still longs to see the world. I've been lucky enough to live in a few different countries, and the experience has been nothing short of brilliant. Even as a picky eater, I love exploring markets and grocery stores in every country I visit.

And as I've begun to learn more about kitchen witchcraft, that interest has extended to the myths and folklore surrounding food as well. From Persephone's pomegranates to black-eyed peas on New Year's Day, I'm hungry for all the stories behind why and how we eat what we do.

What makes a Lychee Martini so awesome?

I first discovered lychee while living in Taiwan, and their sweet and slightly sour flavor was absolutely delightful. If you're ready for a potent cocktail with a hint of tropical sweetness, you'll love this Lychee Martini. Like any cocktail, it's simple to make, especially if you can find lychee juice in your local supermarket.

I imagine serving this drink as a pre-dinner drink at a fancy dinner party, or the kind of gathering where people wear nice clothes and you eat tiny foods on silver trays. Not that I have many of those, but I can pretend. It's also easy to make a pitcher of these before a big party and let everyone serve themselves. It is quite strong, though, so it's not a drink you'll want to have several of throughout the night. Or maybe you do. Whatever makes you happy.

Lychees were the favorite fruit of the favorite concubine of a Tang Dynasty emperor named Tang Minghuang. He apparently went to great lengths to have lychees available for his paramour, and so they have a strong association with love and romance.

This tender sweet fruit is covered with a red, tough, scaly shell, so you could definitely use them for protection to symbolize something you want to keep safe. This fruit is also associated with the energy of sweetness, happiness, beauty, and positive energy. (Sources: Manic Nami, Asia Times)

Tips for making a Lychee Martini

This Lychee Martini recipe is a simple mix of ingredients like any cocktail. If you can get lychee juice, great. Chances are, you'll probably be getting your lychees in a can, unless you live in a particular part of the world at a particular time of year. Or you have access to a great Asian market. If you can't find lychee juice, you could use the liquid from the lychee can, but just be aware that your drink will probably be sweeter.

This drink, like all martinis, is potent. It's mostly alcohol. It's basically one part white rum, two parts vodka, and four parts lychee juice. You can play with the ratio a bit if you like. Garnish this with a whole lychee in the bottom of the glass if you like. Serve it very cold by shaking with ice before pouring it into your martini glass. If you want to make a pitcher, have plenty of ice on hand or keep the pitcher in the fridge.

Take yourself around the world in your own kitchen. Mix up a Lychee Martini to get the party started. It's gonna be awesome. 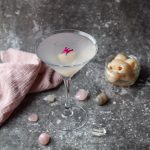 This Lychee Martini Recipe is going to be a hit at your next party. A potent mix of rum, vodka, and lychee juice can be shaken one drink at a time or mixed ahead for a merry crowd.