This Maple Panettone Bread Pudding is the perfect post-holiday dessert. Use that Christmassy Italian loaf cake in a whole new way by soaking it in eggs and cream then topping it with a sweet Bailey's glaze. It's gonna be awesome.

We defy the Earth's unyielding winter by bringing gifts of food at this time of year. I love the way humans have developed a tradition of sharing their abundance during the darkest, least fertile time of year. We were bound to survive because we formed communities that took care of each other. To this very day, nobody shows up at someone's house without a bottle of wine or a tray of cookies.

Of course, another common gift at this time of year is a panettone. How many of you bought one of these sweet, buttery loaves or received one as a gift this year and then forgot all about it? The Christmas puddings, trifles, and mince pies have all been eaten (or the Christmas cookies if you're American and like delicious things). But that panettone is still sitting in its box. What's a kitchen witch to do?

Obviously, panettone is delicious just as it is, but if you want to transform it into something else, a Maple Panettone Bread Pudding with Bailey's glaze is an excellent option. It's quick and easy and so delicious. My husband ate three pieces in one day. Panettone is already filled with dried fruits and citrus zest, so you don't really need to add much else to it. I had planned to add some chopped nuts, but they didn't arrive with my grocery order. I don't think anyone missed them.

Bread pudding is comfortingly squidgy with gorgeously crunchy caramelized shards on top. The Bailey's glaze adds a festive sweetness that tastes just a bit boozy without making you drunk. It's two tablespoons for the entire recipe, so you're fine. This is the perfect dessert for those calm and quiet days following Christmas. It's got all the flavors you need to evoke the winter season.

I thought for sure panettone would have some ancient significance, and although it may date back to Roman times, it's history and spiritual significance is a bit vague.

Raisins, and the grapes they're made from, have plenty of magical properties, though. They're a symbol of fertility, and eating grapes or raisins is believed to strengthen mental powers. Grapes have been celebrated for centuries and are sacred to wine deities like Dionysus and Bacchus. You can use grapes or raisins on a money altar. Since raisins are dried, they'd be good for spell jars or charm bags. (Source: Breeland Walker)

Making bread pudding is super simple. For this, you'll just tear your panettone into chunks and spread them out into a casserole dish. Do this bit first thing in the morning to let the bread dry out a bit.

In a mixing bowl, you'll whisk together eggs, brown sugar, cream, and milk. For this one, we're also adding a bit of maple, either extract or syrup. If you wanted to add any other spices or flavorings, you could do that here, but panettone already has lots of that going on. Then just pour this mixture over your bread pieces, press the bread into the liquid, and let it soak in for about 20 minutes. Then bake this for about 40 minutes to set.

To make the glaze, just add some powdered sugar to a mixing bowl, drizzle in a little Bailey's, and start whisking until it's thick but drizzly. You don't even have to measure if you don't want to. If you'd prefer a non-alcoholic glaze, use cream and a bit more of your maple extract.

Serve this while it's still warm. A little bit of vanilla bean ice cream would also be fabulous here.

Make something good into something awesome. That's what kitchen witchcraft is all about. This Maple Panettone Bread Pudding is perfect for that. 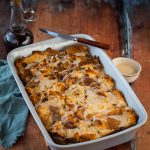 This Maple Panettone Bread Pudding is the perfect post-holiday dessert. Use that Christmassy Italian loaf cake in a whole new way by soaking it in eggs and cream then topping it with a sweet Bailey's glaze. It's gonna be awesome.