These Mini Pork Pies are a simplified version of the British classic. Your favorite pastry holds a juicy, seasoned pork and onion filling perfect for snacks, parties, and picnics. It's totally awesome.

I've mentioned my long time love affair with Britain many times. Ever since I was little, I loved stories of fairies and unicorns. Not the pink fluffy ones we see today, but magical beings who were fierce and wild and unimaginably powerful. They existed in a mysterious landscape of wildflowers and blossoming trees, and mystery. Magic was everywhere, just out of reach. It could show up in a rabbit hole or ring your doorbell answering and ad for a nanny. Anything was possible.

As I continue to study witchcraft, the culture and traditions of the ancient people who inhabited Britain and Ireland infuses so much of what we hold dear today. While England's imperialist history leaves much to atone for, even in Scotland where I currently live, the people who have existed here have kept magic alive and helped to make it more accessible to us today.

Just to say, this is not even close to the only source of magic and witchcraft being kept alive in modern times. It's just the one I'm focusing on today.

Learning about English and British culture more broadly has been a dream come true. And while the food of Britain is not commonly known to be it's best attribute, there are some food traditions that I've come to appreciate. Traditional pork pies are fiddly and hard to make. There's that weird jelly. The crust is hand raised. It's a lot of work. So because I'm a lazy American, I cheated.

These pork pies are made with onion, ground pork (get as high a fat content as you can) and plenty of spices for flavor. I use store-bought pie dough or shortcrust pastry, pre-rolled even, and bake these in a muffin pan to give them their shape. They're savoury and delicious. You can eat them hot or cold, which makes them perfect for a picnic in the countryside. And maybe leave a bit as an offering to whatever spirits surround you in those mysterious woods.

Though pork pies have been around for centuries, I couldn't find any interesting myths, legends, or symbolism surrounding them. If you come from Anglo-Saxon or Celtish heritage, or have ancestors amongst the many other peoples who have inhabited this part of the world, making your own pork pies could be a lovely way to honor them, especially if you now live far away from somewhere that sells pork pies.

You could also use sigil magic when creating the vent in your pork pie. I cut tiny little five-pointed stars into the top of mine to honor the elements and bring protection. Get creative with your sigils and symbols. You could even mark each one differently for specific people.

These are fairly simple. We're taking a lot of cheats. Start by chopping an onion in your food processor, then adding the pork along with seasoning and spices for flavor, and blitz it all together. If I make this recipe again, I'm going to add a couple of slices of bacon to the food processor as well to bring a bit more fat to the party.

I use store-bought shortcrust pastry for my pork pies. Roll the dough out a bit thinner to stretch it to 12 pies. If you don't quite manage it even after re-rolling the scraps several times, it's not the end of the world. You may want to alternate big and small circles, though, so that you have the same amount in the end.

I use a shot glass to help me press the larger dough circle into the cup of the muffin pan. Then fill it with your pork mixture, put the smaller circle on top, and pinch the dough together to seal it. These get an egg wash and a vent in the top to allow steam to escape. Then bake until golden.

Let them cool in the pan a bit before gently removing to a wire rack to cool. These can be eaten warm or cold. You can serve them with gravy or onion chutney, or just scarf them as they are.

I'm learning to love British food more and more with every passing year. These Mini Pork Pies are definitely helping. I hope you give them a try. 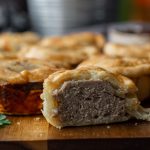 These Mini Pork Pies are a simplified version of the British classic. Your favorite pastry holds a juicy, seasoned pork and onion filling perfect for snacks, parties, and picnics. It's totally awesome.