No-Bake Double-Layer Pumpkin Pie is a delicious pumpkin pie alternative. Made with vanilla pudding mix and a graham cracker crust, you don't even need to turn on your oven to make this amazing dessert.

The waning crescent moon always has a tendency to lay me out flat, and this month, with the days growing steadily darker, all my plans to be hyperproductive during my week off from my normal job have been thwarted. All I want to do is be under a blanket with a book and a cookie.

There was a time when I would have felt a lot of guilt and shame for moving at a slower pace. I would have chastised myself for being unproductive which, ya know, is almost as bad as being a criminal or something. I do still get pangs of guilt, but I'm learning to trust the rhythms of life. It's what any good witch would do.

In this season of the witch, I'm making you my favorite version of pumpkin pie. My mom used to make this No-Bake Double-Layer Pumpkin Pie when we were kids, and I always loved it. It's sweeter than a traditional pumpkin pie, and I'm not mad at it. There's a cinnamon graham cracker crust, a sweet cream cheese layer, and a spiced pumpkin layer, and they're all awesome.

Making this pie is pretty straight forward. Smash up some cinnamon graham crackers (or add a pinch of cinnamon to some digestive biscuits if you can't get graham crackers). Mix the crumbs with plenty of melted butter and press them into the bottom of your pie pan.

To make the cream cheese layer, we whip up the cream cheese with some milk and sugar. This will lighten it up a bit before folding in some whipped topping. Spread that into your pie and stash that in the fridge.

For the pumpkin layer, we add two boxes of vanilla pudding mix to a can of pumpkin puree, along with some milk and a whole bunch of spices. If you have pumpkin pie spice, you can just use that. I use individual spices because I have them, and it's easier for me. Do what you gotta do. Spread this on top and put the whole thing back in the fridge overnight.

I have to confess, this pie doesn't ever get super firm, so it can be difficult to get nice neat slices. I assure you, a messy piece of pie will not ruin the flavor in any way. If you're really worried about presentation, you could always make this in individual jars.

Whether you're howling at the moon or conserving your energy this season, just know that however you're feeling is fine. Maybe get in the kitchen and whip up some magic in the form of a No-Bake Double-Layer Pumpkin Pie. Put on a spooky film, get a cozy blanket, and a big piece of pie. How much more awesome can it get? 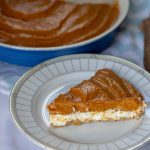 *If you can't get graham crackers, in the UK for instance, you can substitute 125 grams digestive biscuits plus ¼ teaspoon cinnamon

**No Cool Whip where you live, either? 1 packet of Dream Whip of Bird's Dream Topping, prepared according to packet instructions, wil suffice.