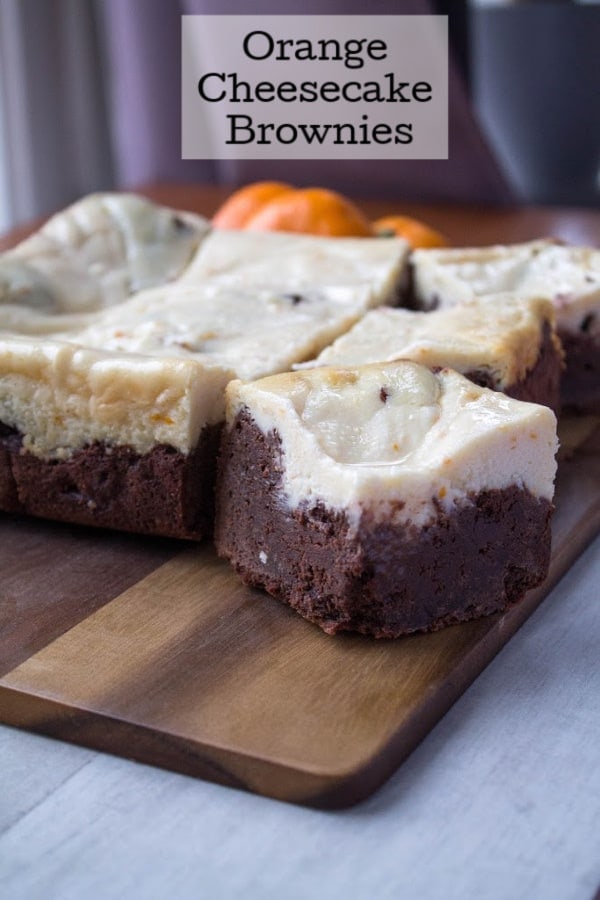 These Orange Cheesecake Brownies are incredible. The brownie layer is dense and fudgy while the cream cheesecake layer is creamy and citrusy. You won’t be able to keep your hands off them.

Do you guys play video games? My husband loves them. He can play the same game for eight hours in one day if it’s got a good story. I’ve seen him build massive sumarines, fight tigers, and make friends with a post-nuclear apocalypse monster. Some of the stories are fairly compelling. I watch him playing and I think, I would read that novel. I don’t think that’s actually a thing.

Apart from a few Nintendo games as a child, I’ve never had the coordination or interest to play most video games. The only thing I ever liked was The Sims mostly because it involved ticking things off your task list and involved no hand-eye coordination. I’m extremely nerdy. I don’t know, I guess I’d rather be reading. Or baking. Especially brownies.

Guys, these Orange Cheesecake Brownies are gonna blow your mind. My co-workers couldn’t stop talking about them. The brownie layer is crazy fudgy. It’s basically pure goo barely held together by a bit of flour. The orange cheesecake layer is creamy with a distinct citrus hit. The orange flavor really comes through and compliments the chocolat so beautifully.

Layered baked goods can sometimes seem complicated, and yes, we’re mixing up two different concoctions, but you’re just putting one on top of the other and baking. The only thing a little bit tricky about this is deciding when it’s baked. You want to take it out of the oven when the center still has a bit of a wobble. And you do need to let this chill before slicing into it. It’s totally worth it, though. The texture will be heavenly.

Whatever you like to do to unwind, make sure there are Orange Cheesecake Brownies involved. They make everything better.

If you want more brownie action, try these S’mores Brownies.

Get ready to have the world's best smelling house.