Pumpkin Stuffed French Toast is the perfect holiday breakfast. It's quick and simple and completely indulgent so you can still wow people, even the day after a big feast. It's gonna be awesome.

Thanksgiving and Christmas dinner always get a lot of attention. The proudly glistening roast turkey, the serving bowls mounded with sweet potatoes, mash, Brussels sprouts, and all the foods you love. The flowing wine and the merry guests all secretly unbuttoning their pants and sighing with gluttonous joy. The spell has worked. The kitchen witch sends up a silent word of gratitude to the Universe for having produced another successful holiday meal.

But then everyone wakes up in the morning, and suddenly they're hungry again. You could certainly just pull out some boxes of cereal and a carton of milk. There would be absolutely no shame in that. But if you have enough energy to keep the magic going a little while longer, why not make a deceptively simple and totally delicious breakfast.

This Pumpkin Stuffed French Toast is so ridiculously simple and totally indulgent. It's basically a pumpkin butter and chocolate sandwich made with fluffy brioche that gets soaked in a vanilla and cinnamon scented milk and egg mixture then fried in butter. All of those words are good.

I like to top mine with butter and maple syrup, but you could also make a cream cheese and cinnamon glaze to drizzle over the top if you really wanted. Definitely use store-bought pumpkin butter if you can get it. If you can't, though, I used this pumpkin butter recipe, and it was awesome and easy.

Pumpkins are bursting with abundance energy and chocolate is ideal for self-love and friendship. But really the main ingredient here is bread. French toast is a beautiful way to transform bread past its prime into something beautiful once again.

There's so much history and tradition around the cultivation of grain, and hence the making of bread, so naturally, it's full of magical energy. The first ovens actually resembled a woman's pregnant belly, and the whole community would use this fiery womb to bake their daily bread. In some cultures such as China and Russia, ritual breads are intricately shaped and baked as part of religious ceremonies.

In its simplest form, bread is a combination of grain and water baked in a hot oven. And if you take into account the fabulous smells, it incorporates all four elements. Yeast could also be used to represent air as it creates gas that helps yeasted breads rise. Bread can be used as an offering or to provide grounding energy. (Source: The Element Encyclopedia of Witchcraft by Judika Illes)

For details on the magickal properties of the ingredients in this recipe, check out the Kitchen Magick page.

I've mentioned before that this is really easy. Slice up some brioche and put some pumpkin butter on each piece of bread, then sprinkle one side with some chocolate chips or chopped chocolate, and make a sandwich. In a shallow container, beat together eggs, milk, vanilla, and cinnamon. Dip each side of your sandwich into the egg mixture, the put it in a hot skillet.

A couple of tips. Make sure your skillet is preheated. I like to go with non-stick anytime I'm cooking anything egg-related. If you're using a cast iron skillet, be sure you've added some butter or oil to avoid any sticking. These only need about 3 minutes per side. Serve with butter and maple syrup or whatever turns you on.

What is pumpkin butter?

Pumpkin butter is a sweet, spiced pumpkin spread, similar to apple butter. It's simple to make yourself with canned pumpkin, brown sugar, and a few spices. It can sometimes be found with jams and other spreads in American grocery stores, particularly in autumn.

No matter how good dinner was, people will always be hungry come morning. Might as well make them something simply awesome like this Pumpkin Stuffed French Toast. 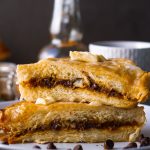 Pumpkin Stuffed French Toast is the perfect holiday breakfast. It's quick and simple and completely indulgent so you can still wow people, even the day after a big feast. It's gonna be awesome.

Processing…
Success! You're on the list.
Whoops! There was an error and we couldn't process your subscription. Please reload the page and try again.
« Holiday Food Traditions
Awesome in November »