This Pumpkin Spice White Russian is basically awesome. Swap out some of the milk with pumpkin spice coffee creamer to make a delicious autumn cocktail.

I am sometimes super basic, and I just don't care. Every year, I look forward to getting a pumpkin spice chai. It's my favorite. The girl who worked at the Starbucks by my house in Hawaii used to always let me know whenever they had pumpkin spice syrup in stock. She'd happily make me a chumpkin as she called them. It was delightful.

Of course, there was no such thing as a chai latte at Starbucks in Taiwan, let alone pumpkin spice. But surprisingly, the UK is hit and miss. We were in London one October and I tried to order one at three different Starbucks. None of them had it. Apparently, they're too cool for pumpkin spice in London. I failed this year as well. I hardly leave my house, and we couldn't add pumpkin spice to my chai latte from the app, so it didn't happen.

Luckily, I've now learned to make my own pumpkin spice creamer, thanks to Sally's Baking Addiction. I basically just pumpkin spice every drink now. I have a problem.

What makes this Pumpkin Spice White Russian so awesome?

In case you're in the mood for something a little more grown up, but no less cozy, I'm bringing you a Pumpkin Spice White Russian today. It's simple. You transform your favorite cocktail into an autumnal dream by swapping out some of the milk with pumpkin spice coffee creamer. It adds a bit of sweetness and beautiful warming spice. It's like if you could put a wooly jumper into a cocktail glass.

A cinnamon stirring stick is totally optional, but if you've got 'em, I can't think of a cuter use. These would be so good to sip in front of the fire after a day of crunching through leaves in the crisp autumn air. Basic. Awesome. Same thing.

Love what you love, kids. And don't let anyone tell you that you shouldn't. Just make them a Pumpkin Spice White Russian. Those criticis will shut up real quick. 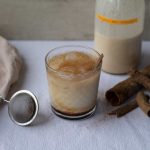 A sweet, warmly spiced, pumpkin enhanced White Russian cocktail is the ideal fall drink for those weeks when you really need to chill out.