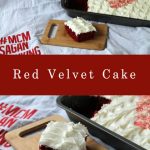 This small batch Red Velvet Cake can become a delicious little love spell. Call in some color magic, use symbols and sigils to represent your intention, and share it with someone you are passionate about. Or just eat some really delicious cake. It's all awesome.

In the run-up to Valentine's Day, there's always so many sweet treats to share. In my research for the Imbolc episode of the podcast, I discovered thta Valentine's Day actually has its roots in the Roman festival of Lupercalia. But while it was sexually charged, Lupercalia was anything but romantic.

Far from candle-lit dinners and frilly boxes of chocolate, this Roman festival of fertility involved sacrificing goats and donning the goat skins. Women would gather at this festival with hopes of receiving a fertility blessing by being struck with whips made from the goat skin as well. Apparently, men and women would be coupled up at this festival, seemingly at random. They'd then stay together for the whole year. Kinda puts that Valentine's date night into a whole new light.

Thankfully, all I'm suggesting you do for Valentine's Day is make an 8x8 Red Velvet Cake with cream cheese frosting. It's obviously still more than two servings, but at least you won't be left with an entire massive layer cake at the end. I assure you, this is every bit as delicious.

Red Velvet Cakes are notorious for being super moist and just a bit tangy. This version is made with buttermilk and a bit of apple cider vinegar, so the acid cuts through the sweetness to keep things exciting. The color is artificial, and you could certainly skip it if that bothers you. Of course, it would just be brown velvet cake, but that's delicious, too. This cake stays awesome for days.

Whatever a color reminds you of is how it's going to have the strongest power in your craft, but there are some traditional associations with certain colors. Red has long been symbolic of passionate love and is strongly associated with Valentine's Day. Many women know the power of a red dress or red lipstick. It's perfect for seduction magic and lust spells.

Get the recipe on Patreon

If this recipe sounds totally awesome to you, you can get it by becoming a supporter on Patreon. Your subscription helps keep this blog alive so that I can pay all my expenses and buy ingredients and equipment to test and share all of these recipes. It's also a huge vibration booster, not gonna lie. It lets me know that someone out there benefits from my work, so I should keep doing it.

Patreon patrons get a bunch of awesome benefits and exclusive content such as:

Come join our coven. It's awesome in here.

I hope you have an awesome Valentine's Day when it comes. I hope you don't have to spend the night in the woods with a stranger unless that's what you really want. And I hope you bake a red velvet cake because it's super awesome.