Snickerdoodle Cupcakes are made with tender, buttery cake and fluffy buttercream, both with a hint of cinnamon, just like your favorite cookie. This recipe is baked from scratch, and the result is absolutely beautiful.

It's autumn at last. Okay, it's still not officially autumn until we get to Mabon, but it feels like autumn, and that's what counts. I'm trying not to think about the long winter and how much I'll miss the sun. I'm staying in the moment and enjoying the crisp air and the way the world seems to vibrate a little bit differently in these times of transition.

Witchcraft has helped me take a different approach to the seasons. I'm hoping to lean in to this season of rest. I'm hoping to use it as a time to learn and prepare so that I'll be ready to grow once Ostara comes around. And I'm hoping to build a lot of fires and make a lot of magick. What about you?

What makes Snickerdoodle Cupcakes so awesome?

I actually made these very cupcakes that you see here for my coven's Lughnasadh celebration. Okay fine, I made them to take their picture for the blog on the same day as our Lughnasadh celebration, and this is just what they got. I assure you, though, it was no hardship. These babies are absolutely delicious.

A fluffy, tender, buttery cake is flavored with cinnamon. Then it gets topped with a cloud of cream cheese frosting that gets sprinkled with a generous amount of cinnamon sugar, just like everyone's favorite snickerdoodle cookie. I kept them rustic and just plopped a big blob of frosting on top then smoothed and swirled it with an offset spatula. I like the way the sugar almost shimmers a bit. And the scent of cinnamon is pure heaven.

How to make Snickerdoodle Cupcakes

There's nothing tricky to making these. It's a standard creaming method, which just means we're beating together butter and sugar until it's fluffy, then beating in some eggs and vanilla. Finally, alternate beating in your cinnamon-spiked dry ingredients with some milk until you have a smooth batter. Fill your cupcake papers about two-thirds full to get a gentle dome on the top.

The frosting is no big deal either. Use an electric mixer to beat together butter and cream cheese, then inevitably make a huge mess by beating in lots of powdered sugar, then a bit of vanilla. Frost your cupcakes however you like, then mix some cinnamon sugar. You can do this on a small plate and gently press the frosting into the cinnamon sugar, or just sprinkle it over the top. I've done it both ways, and they're both fine.

How long can I store these cupcakes?

I have one of those cute cupcake shaped cupcake carriers that gets a pretty good seal on the lid. This recipe only makes a dozen, but they're still soft after three days. Beyond that, they did start to go a little bit stale, but were still delicious. Just store them in an air tight container, and put them in the fridge if your kitchen is warm.

Cinnamon reminds me of my mom's baking. The scent instantly evokes home, comfort, and safety. Cinnamon can be used in witchcraft as a positive blessing for yourself and your home. With its fiery energy, it's also associated with love and passion. Cinnamon is also one of the prosperity spices, so you can use it to call in money. It can be used for personal strength and psychic awareness as well. Try burning cinnamon incense while meditating. (Source: Everyday Magic by Semra Haksever)

For more magickal info on the other ingredients in this recipe, be sure to check out my Kitchen Magick page.

We can find the good in every moment and make the most of every season. And if we've got Snickerdoodle Cupcakes, we know it's gonna be awesome. 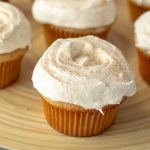 If you make this recipe, don't forget to leave a rating and a comment to let me know how it went. Thanks so much!