This Spaghetti Quesadilla is a ridiculously awesome way to eat leftover spaghetti. Pair your leftovers with plenty of shredded mozzarella inside a tortilla, then cook it in garlic oil until crispy on the outside and melty on the inside. It's almost better than the original dish.

While the concept of transfiguration in Harry Potter was really cool, the things they transfigured always seemed a bit impractical. How many pincushions does a person really need, and how easy is it to find a hedgehog to transform into one?

As kitchen witches, we're transfiguring all the time. Of course today, science has explained all the chemistry. We know about denaturing proteins and all that junk. But even so, transfiguring a gross and gloopy raw egg into irresistible dishes of almost limitless variety is still pretty magical.

What makes a Spaghetti Quesadilla so awesome?

This time, we're transfiguring leftover spaghetti, which is already pretty awesome into something even more awesome, a Spaghetti Quesadilla. We've got tender pasta in flavorful tomato sauce, gooey creamy mozzarella cheese, and a crunchy garlic-infused tortilla. I make spaghetti just so I can have quesadillas for a week. I never get tired of them.

They're also ridiculously easy to make and something your teenagers could easily do for themselves. They're good for lunch or dinner. You could even share one as a snack. They're basically irresistible.

Have you ever heard of trash magic? I learned about this from one of my favorite witchcraft teachers, Maggie of Mumbles & Things. The basic idea is that you take items that would normally just be thrown in the trash and transform them into magical objects, either by creating something useful or beautiful or using them as materials in spellwork. You can do this with your own trash or with trash you find in the community.

While this may not be exactly trash magic, this recipe is a close cousin. Do we make leftovers magic a thing? I wouldn't use this recipe as a spell to impress someone new. I'd call on this recipe to deepen an old reltationship. Make spaghetti quesadillas for your best friend, then eat them on the couch while watching your favorite comedy. That's the kind of energy we're working with here. Transforming something old into something beautiful.

Tips for making a Spaghetti Quesadilla

Look, this is ridiculously simple. I've included measurements in the recipe card, but these are mere suggestions. Use your eyes and your hands. Go by feel and what you like.

That being said, you do want to keep an eye on your heat so that you don't burn the outside of the tortilla before the cheese has a chance to melt. And even though I made a round quesadilla with two tortillas for the photos, I'd actually never do that in real life. A single tortilla folded over is much easier to work with. You can serve this with extra tomato sauce for dipping if you have it.

Transfiguration is at its best when we take something good and turn it into something awesome. This Spaghetti Quesadilla meets that criteria for sure. 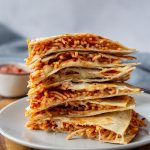 This Spaghetti Quesadilla is a ridiculously awesome way to eat leftover spaghetti. Pair your leftovers with plenty of shredded mozzarella inside a tortilla, then cook it in garlic oil until crispy on the outside and melty on the inside. It's almost better than the original dish.