Guys, the things British people put between two pieces of bread will boggle your mind. It's just carbs on carbs on carbs over there. Never mind the ten thousand synonyms they have for sandwich. You're gonna love it. 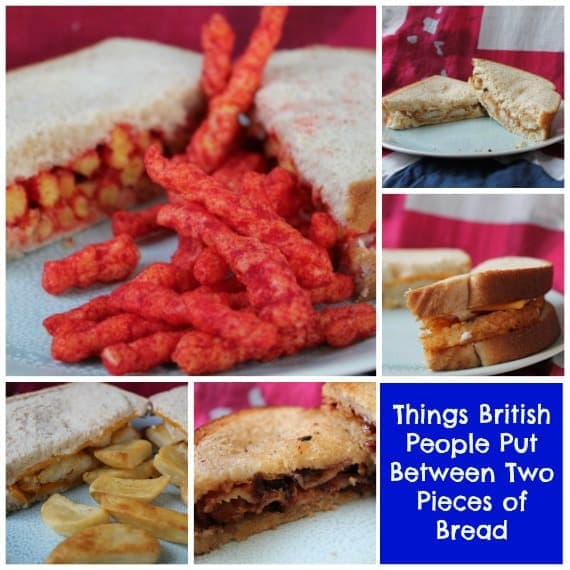 Renee asked me to write this because she thinks I'm weird. Apparently putting certain foods between two slices of bread is taboo in the US. Back home in Blighty, we have no such concern. Everything is fair game and easily sandwich-able. This post is going to detail my favourite things to put between two pieces of bread to make a 'butty'.

Butties, barms, batches, baps, tea-cakes, sarnies. These are just some of the words used in the UK for sandwiches. Each region has it's own word for a bread-filling-bread combo. If you try to use the wrong word in the wrong region, you will get some funny looks. Try ordering a 'chip tea-cake' in London...go on, I dare you!

First up is the cornerstone of any Friday night 'chippy tea', "The Chip Butty".

The chip butty consists of two pieces of bread, stuffed with chunky, fluffy, piping hot chips! Most people like to butter their bread, I prefer to coat the inside of the butty with a thick layer of mayonnaise. In this version, I have included two slices of cheese for my American viewers (this is not a normal British addition).

Next up comes the humble yet elegant, "Crisp Butty".

This beautiful creation was a particular favourite of mine as a child. I would eat this every single day for my lunch. Some days I would stay in bed, pretending to be asleep until close to noon, just so I could eat these instead of cereal! You can use any crisps you can lay your chubby little fingers on. I used 'Flaming Hot Cheetos' because they were the closest I could find to my UK favourite, 'Flaming Hot Monster Munch'.

Next we have, "The Hash Brown Butty".

This is a masterpiece of a sandwich. Primarily used after a night out, this sucker can soak up the whole evenings-worth of alcohol. Aside from the alcohol-soaking-up qualities, this sandwich is one tasty mofo. Bread, hash browns and cheese with a liberal smearing of mayonnaise for good measure.

Next is the, "Fish Finger Butty".

A student invention, the fish finger butty is both economical and quick to make. Two slices of the cheapest bread in the store, five sticks of breaded fish and a choice of either ketchup or mayonnaise. None of that fancy French Tartar sauce! A-for-effort!

Last but by no means least is, "The Bacon Butty".

This awe-inspiring sandwich is known the length and breadth of the UK. Perfect for kick-starting your hang-over-ridden head the morning after the night before. This baby has grease, bacon and starchy goodness, all rolled into one tasty package. You can fry the bread in the bacon fat for extra greasiness. I used BBQ sauce in this particular sandwich because we didn't have HP brown sauce (the ubiquitous bacon butty dressing). Ketchup would also suffice.

I hope this has been an educating experience for any non-Brits out there. Keep your PB&J, and make yourself one of these creations. Above all, stay AWESOME!