It will only take you about five seconds of poking around my blog to know that I am not a vegan. I normally hate vegetables, even though I know I shouldn't. And yes, I also 100% know that being a meat eater is in contradiction with my environmental goals. I am an imperfect human. We all are.

My favorite food is a cheeseburger, and I'll take the opportunity to put bacon on almost anything. I almost can't be friends with someone who says they don't like cheese, and there's always ice cream in my freezer. I'm part of the problem. I know, I know. Everyone always tells me I should make more recipes that are healthy or vegan or keto or gluten-free, etc. But if I don't think it's awesome, it doesn't get put on the blog. This blog is about the food I love, and I think you'll love it, too.

What makes this soup awesome?

That's why I got so excited when I made this soup and loved it, then quickly realized I could make it vegan with just one simple change. The first time I made it, I used half veggie stock and half chicken stock because that's what I had in my pantry. But every other ingredient is just a vegetable. Frozen sweet corn, bell peppers, and a drizzle of garlic oil. That's all you need. Maybe some salt and pepper.

I have to admit, the version with half chicken stock tasted slightly better to me, but there could have been other variables as well. Do what you need to do.

The other problem was that this soup was ugly. I knew I'd need some toppings, but if I wanted to keep it vegan, I couldn't use bacon, or sour cream, or crispy proscuitto, or cheese like I normally would. So I made some garlic croutons, roasted some corn, and gave you a drizzle of vegan yogurt. It not only made the soup nicer to look at, it added yet another level of texture and flavor, taking the soup to the next level.

This is probably one of the easiest soups I've ever made. All you need to do is get your oven roaring hot while you slice up a couple of yellow and/or orange bell peppers into strips and arrange them on a baking sheet. Drizzle over the garlic oil, and give them a toss to coat. Then roast them in the oven for about 25 minutes.

While the bell peppers are doing their thing, add your favorite vegetable stock to a big pot. Then add a bunch of frozen corn. Let it simmer away for about 20 minutes. If you want to add a handful of the corn to your baking sheet with your bell peppers to garnish with later, that'd be cool.

The last thing to do is blitz it all together to make a smoother but still highly textured soup. Remove about a half a cup of the corn first to keep some whole pieces running throughout. Then use an immersion blender or a standard blender to blend it up until it's got a texture you love. Then all that's left to do is serve it up with some homemade garlic croutons and vegan yogurt. Or not. You can eat this naked, and it's still delicious.

If something is awesome, I'm gonna let you know about it. Sometimes it's cake and bacon cheeseburgers. This time, It's Vegan Sweet Corn & Roasted Bell Pepper Soup. Eat well, my friends. 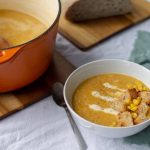 Recipe adapted from Kitchen: Recipes from the Heart of the Home by Nigella Lawson.