These Potato Rolls are made with instant mashed potatoes for a light and fluffy texture. Brushed with salted butter, they're absolutely delicious fresh out of the oven, but they also stay soft and pillowy for days. Can't stop won't stop.

It is slightly incomprehensible to me that there are people in the world who choose not to eat bread. I'm not talking about those folks who can't eat gluten for medical reasons. I really feel for them, but obviously, keep yourself alive. I'm talking about those low-carb, keto, paleo, various bread-free diets out there. I guess to some people, bread is the culprit behind the fall of civilization, but to me, it's a gift from the Gods.

Traditionally, bread has actually been given as an offering to various deities around the world and still figures prominently in religious observances worldwide. The science of flour, water, salt, and yeast combined with time and heat that leads to bread is still magic in my mind. Even though we now have the tools to understand the chemical reactions occuring in bread baking, I can't help but feel an alchemical transmutation taking place in my kitchen. And to be honest, I might choose freshly baked bread over gold anyway.

What makes Potato Rolls so awesome?

These Potato Rolls are pillowy soft and so flavorful. Some of the starch comes from potato rather than wheat, and you can look up the science for yourself if you're curious, but what you need to know is that it yields a bread roll that stays soft and flavorful for days. Potato Rolls are my absolute favorite.

These are a plain, everyday bread roll that you could use for sopping up gravy or sauce, dipping into soups or stews, or just standing at the kitchen counter next to a stick of salted butter and shoving in your face one after another because they're so irresistible. Do what you gotta do.

How to make Potato Rolls with instant mashed potatoes

We've got a pretty standard method here. We're gonna heat up some milk and melt some butter in it until it reaches about 110 F (43 C). In the bowl of a stand mixer (or a regular mixing bowl if you're going to knead by hand) combine all-purpose flour, potato flakes or instant mashed potatoes, salt, a bit of sugar, and yeast. If you don't have instant yeast, you may need to wake it up in some water first. Check your package. Then bring it all together and get to mixing.

The gurus say to get all your ingredients combined and then let it rest for a bit before kneading until a smooth dough forms. Allow your dough to rise for an hour or two until doubled in size, then divide your dough into 16 roughly equal pieces and shape them into rolls. Put these in a baking dish, and let them rise again while you preheat your oven to 350 F (175C).

Then bake your rolls for about 20 minutes until light golden and fluffy. Brush some melted butter over the top while they're hot out of the oven, and serve warm with more butter.

Is it a bread roll or a rolled up potato?

For my British friends who have never heard of potato rolls, first of all, I'm sorry that your culture has wronged you in this way. A potato roll is just a bread roll with some of the starch coming from potatoes instead of wheat. They're awesome and you will now want to eat them always.

But can I use real potatoes instead?

Yes, if you really really wanted to go to the trouble of boiling or baking a plain potato and mashing it up to use in your bread, you could do that. I've done it with other recipes, and it's really good. Using the instant mash yields an ethereally light bread, though. If you use mashed potato, your bread will be a little more dense. Your choice.

We've discussed potatoes, wheat, and pretty much all the other ingredients of this recipe before (see Kitchen Magick), but we have yet to investigate the magical properties of yeast. I mean, do we even need to consult a book? Yeast is a living thing that produces gas and makes bread rise. That's pretty freakin' magical.

Commercial yeast didn't become available until the late 1800s. Today, modern witches have easy access to this living energy. We can still call on the energy of yeast to bring us a rise in our vibration through the patient practice of bread baking.

Bread is life, friends. And Potato Rolls are life at its finest. Go on, get in the kitchen and make some magic. 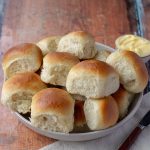 These Potato Rolls are made with instant mashed potatoes for a light and fluffy texture. Brushed with salted butter, they're absolutely delicious fresh out of the oven, but they also stay soft and pillowy for days.

Don't forget to rate this recipe and let me know how you got on. Leave a comment as well to let other readers know how it went. Thanks so much!