Yesterday, I put a big thing out into the world. It was a soft launch. Marketing experts would say I should have waited to launch a podcast until I had four episodes available for people to listen to. Maybe I should have planned a big marketing campaign to blitz the social media universe with. I might have done everything completely wrong. But I just couldn't wait to get started.

In my world, this project has been a couple of months in the making, and now that it's out in the world, I think I deserve a reward. Maybe a dessert. Maybe a childhood favorite from back home in America. Or maybe something a bit boozy. I don't know. What do you think?

I think we should all have a Boozy Root Beer Float this weekend. It's super simple and so sweet and delicious. My mom worked at an A&W drive-in when I was little, so I've been a root beer connosieur my whole life. I made and consumed a whole lot of root beer floats back in the day, but now I prefer a slightly more grown up version.

The ideal version of this is with vanilla vodka and spiced rum, but you could easily substitute other spirits if that's what you have at home. Plain vodka or dark rum would also do the trick. I like to continually top up my glass with root beer as the ice cream slowly melts. I also love when little root beer ice crystals form in the ice cream. Eating a root beer float is pure joy.

How to make a Boozy Root Beer Float

Although there is some debate about whether you should add the root beer first or the ice cream first, making a root beer float is really not rocket science. Scoop some ice cream into a glass, add your spirits, and top up with root beer. Get yourself a straw and a long spoon and drink up. Are instructions even necessary? I mean, probably not. I've provided a recipe card below nonetheless.

What the heck is root beer anyway?

Root beer is not common here in the UK, and my British friends are often perplexed. I looked it up to confirm. Each brand has a unique recipe, but root beer is traditionally flavored with sassafrass root and bark. It's sweet and spiced. It's caffeine-free and usually forms a foamy head when poured.

This is obviously very personal, but my favorite is Henry Wiehard's. It's a premium brand and generally only available in the Pacific Northwest of the US. My favorite major brand is A&W.

Rum is used widely used as an offering in Haitian Vodou and other Caribbean magical practices. It can also be used to evoke prosperity, love, strength, and connection. It's traditionally made from sugar cane, so I would use it in a similar way to sugar. Leave out a bit of rum to attract more money into your life. (Source: Wolf of Antimony)

Whether you have something to celebrate or you just want to feel like a kid again, a Boozy Root Beer Float is exactly what you need. It's gonna be awsome. 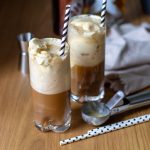 If you tried this recipe, please leave a rating and a comment to let me know what you thought. I love your feedback, and it helps other people find the recipe. Thanks!

« The How to Be Awesome Podcast
Recipes to Celebrate Litha »