Full English Breakfast is practically an institution in the UK. It's a porky fried feast with bacon, sausages, eggs, and baked beans. Customise it however you like. Just don't worry about the calories.

I've lived in Scotland long enough now that I'm starting to lose track of some of the differences between the US and the UK. I've gotten into the habit of ordering Skippy peanut butter on Amazon. I know the one place in town where you're likely to find canned pumpkin puree. I've basically given up all hope of every eating great Tex Mex. I mean, is it too much to ask to get a wet beef chimichanga with a pool of really great refried beans alongside? Apparently it is.

I've learned most of the lingo. I think. I know that greet means to cry, and "how no" actually means why not. I've learned to drive my moped on the left side of the road, and I almost never forget my table number when ordering food at a pub. I'm starting to get the hang of things.

But I have to admit, I still find the whole Full English Breakfast thing a bit overwhelming. It's just a lot. But you'll never get a British person to speak a word against it. With restaurants and neighborhood cafes being closed for most of the past year, going out for a Sunday morning fry up hasn't really been feasible.

How to make a Full English Breakfast

Given that there are so many components, it's not the simplest thing to do at home. Not that any part is complicated. It's really more about the math than the cooking. You're just picking out your favorite things and figuring out how to get them all hot at the same time. It's something I'm sure every British mom has learned to master. You can use a combination of oven and frying pan to bring this cholesterol fest to the table. Just don't forget the tea.

I've given the instructions for how I tackled what you see in the photos, but your products will probably be a little bit different, so think of the recipe as more of a guide.

What goes in a Full English Breakfast?

This plate is highly customisable. You can mix and match your favorite things. You can even do a vegetarian or vegan version if you need to. And you can make it Scottish or Irish with a few changes.

There's pretty much always going to be back bacon (as opposed to streaky bacon, which is what we're used to in the US) and sausages. In England, it'll be pork sausage links, but in Scotland, you may get square or lorne sausage. You can also have black pudding, which I've added. To make it more Scottish, go for haggis.

I actually meant to include hash browns and just forgot to buy them. They're pretty much always going to be the frozen triangular hash browns rather than an actual shredded potato. You'll also always get toast. If you're lucky, there's insanely flavorful fried bread which is usually cooked last in the frying pan to soak up all the grease that's left from all that pork above. In Scotland, you might see potato scones, and in Ireland, there's likely to be soda bread.

You gotta have at least one fried egg. I like mine over easy with a nice runny yolk, but I find I really only get that when I make my own eggs here. Do what you want with your eggs.

In amongst all this meat and carbs, you'll often see tomatoes and mushrooms. I added cherry tomatoes here more for their aesthetic appeal. More often, it's a plum tomato, sliced in half, and fried. I have a feeling the mushrooms might come from a can. We usually skip this at home because you know I don't want that, and Geoff could take it or leave it, but he'd rather leave it.

I don't know if baked beans count as a vegetable, but I do know it doesn't count as a Full English Breakfast without them. It's gotta be Heinz beans in our house. My husband is very particular about this.

Like I said, a Full English Breakfast is highly customizable. If I've forgetten your favorite thing, please don't be offended. In fact, let me know in the comments if there's anything you like in your breakfast that I've left out. I'm much more of a pancake and waffle kind of girl.

Tomatoes are full of powerful feminine energy. This red fruit full of seeds is known to inspire love and passion, so it would be perfect for a romantic dinner. They can also help protect you from negative vibes. Call in the energy of tomatoes whenever you want things to get a little lovey dovey. (Source: The Witchipedia)

Look, I'm not saying eat a Full English Breakfast every weekend, though I'm sure there are some people who do. I'm just saying, it's worth the experience at least once. If you can finish it, my hat's off to you. And we'll pretend it's a top hat. It's gonna be awesome. 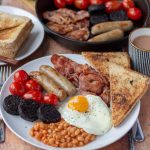 Amounts are merely suggestions. If it's easier to just cook the whole packet of bacon or sausages, etc. just do that and have leftovers.

Making a Full English Breakfast is much more about math than cooking technique. You're basically just heating up a bunch of stuff without really adding anything. Make your own battle plan. Do it all in the oven. Customise your favorite ingredients. Mix and match. Here's what I did: