Make your autumn mornings awesome with Pumpkin Baked French Toast. It's a sweet and easy way to feed a crowd for breakfast or brunch with a hint of cinnamon for those clear, crisp mornings.

Autumn is coming in the Northern Hemisphere, and you can't stop it. The season of the witch is upon us. As the vibrancy of summer begins to fade into the chill and decay of Fall, those of us who connect with nature know that we are preparing for renewal. While there is a tinge of melancholy to the season, there can also be joy in the release. The break in the heat provides a reprieve from summer's relentless energy. We can finally slow down and catch our breath.

I love the equinoxes, those days of perfect balance. I love the transitions, the transmutations, the death and renewal that comes with these annual rites of passage. And I also love the food. Comfort me with apples, pumpkins, root vegetables, and warm spices. I welcome it all with pure joy.

This Pumpkin Baked French Toast is absolutely perfect for an Autumn breakfast or brunch. It's so easy to expand this recipe and feed a crowd if you need to. And the whole thing bakes in the oven, so you're not stuck at the stove making French toast two slices at a time.

Stale bread gets soaked in a pumpkin custard mixture and topped with a sprinkling of cinnamon sugar for ultimate autumn flavor. When it bakes, it's creamy and squidgy on the inside with lovely little crunchy, caramelized bits on the top. Serve it with a dusting of powdered sugar and a drizzle of maple syrup alongside your favorite bacon or breakfast sausage.

I mostly know pumpkins for their association with Halloween and the tradition of carving Jack-O-Lanterns, which was brought over from Ireland where they used turnips for the same purpose. But pumpkins are also commonly used in witchcraft associated with the African Diaspora. The pumpkins, native to the Americas, resembled gourds popularly used as contaners and magic spell ingredients in Africa. They were quickly adapted for use by enslaved peoples forced to keep their traditions alive in a foreign land.

Pumpkins are tied to Oshun, the Yoruba orisha of love, beauty, fertility, and magic. Her sacred color is orange, and pumpkins are identified as her children. Those who are devoted to her are forbidden to eat pumpkins and other orange and yellow squashes, especially the seeds.

Pumpkins are also used in Vodou and similar traditions as magical lamps for divination and spell-casting. The pumpkin is hollowed out and filled with oil, then a cotton wick floating in the oil is lit to create the lamp. (Source: The Element Encyclopedia of Witchcraft by Judika Illes)

For more on the magical properties of the ingredients in this recipe, check the Kitchen Magick page.

This dish is super simple. Start by tearing or slicing enough French bread to fill an 8x8 inch baking pan or similar. If it's a day or two old, even better. Let this sit and dry out a bit more while you make your custard mixture.

Whisk together eggs, milk, pumpkin puree, brown sugar, and cinnamon until combined, then pour this mixture over your bread, and leave it to soak for a few minutes. Before you pop this in the oven, make it extra awesome by dotting it with butter and sprinkling over some cinnamon sugar. Bake until it's just set, and serve with maple syrup.

If you're ready for autumn, you need to make this Pumpkin Baked French Toast. It's gonna be so awesome. 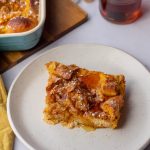 Make your autumn mornings awesome with Pumpkin Baked French Toast. It's a sweet and easy way to feed a crowd for breakfast or brunch with a hint of cinnamon for those clear, crisp mornings.